We Are Now Approaching the “Lehman” Moment… PREPARE NOW!

Someone or some people are in MAJOR trouble.

Back in September 2019, the Fed announced it would begin implementing a number of repurchase “repo” programs.

If you’re unfamiliar with repo programs, these are programs through which the Fed allows financial banks/institutions to park assets at the Fed in exchange for cash.

At the time the Fed announced this, it claimed that it was performing these programs to help with a capital crunch due to tax season. However, that excuse was soon proven to be total bunk – the repo programs were extended from September through October and finally through January.

Why would the Fed be doing this?

After all, the economy was growing at the time. And there were no indications or systemic risk in the U.S. financial system.

Lehman-like Liquidation is Coming to the Markets

The real reason the Fed was doing this?

A financial institution or institutions were in BAD SHAPE and desperate for capital. By bad shape, I mean “Lehman Brothers” type failure.

Now, we do not know who it is. But considering the fact that the Fed announced an emergency round of $1.5 TRILLION in repos last week… and that it stopped the market from collapsing… suggests it’s a very LARGE institution (think the size of Deutsche Bank or UBS).

With this in mind, it doesn’t matter what happens with coronavirus or with the economy. If a large, systemically important financial institution or bank fails, we could get a Lehman-like liquidation in the markets.

If you think I’m being dramatic here, consider that the EIGHT largest U.S. banks just announced they are going to start accessing the Fed’s Discount Window: a means through which the Fed gives banks access to capital overnight.

Again, a large financial institution or institutions are in MAJOR trouble here. The fact that even $1.5 TRILLION in repos didn’t fix this issue means it’s truly a systemic problem.

Today, the market is up a bit, providing us much needed relief from the panic.

But don’t get too comfortable.

Yesterday I hopped on a call with Laissez Faire Publisher, Doug Hill to explain the real risk the market is dealing with right now.

I sent this call around yesterday, but if you missed it, the premise is still in effect.

And those who listen get a pick to play the fear happening in the market.

Click the image below to listen in on the call. 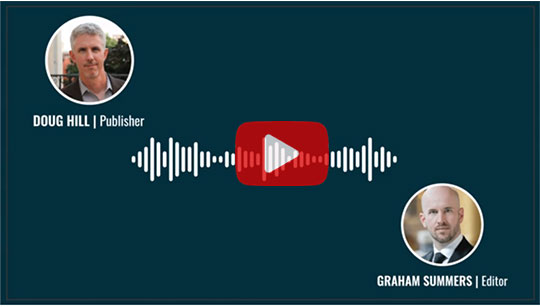 The Fed Just Signaled That It Will Ease Conditions FOREVER

Yesterday’s Fed meeting delivered in a BIG way. Now, monetary normalization is over. Prepare for the melt up…