Ben Bernanke Just Gave Us the Blueprint for What’s Coming

What a crazy turn of events!

Thus far in this crisis, the Fed has:

Under any set of circumstances, the above set of policies would be considered the NUCLEAR option. The fact that the Fed has launched ALL of these in the span of three weeks is beyond incredible.

In the simplest of terms, the Fed has effectively used up ALL of its ammo in less than a single month. At this point, there is not much else the Fed can do.

And yet, the markets continue to implode.

The Fed is Going to Monetize EVERYTHING

As I write this, the futures markets are once again LIMIT down, meaning they had to be frozen after falling 5%.

In an opinion editorial piece in the Financial Times this morning, the two former Fed Chairs urged the Fed to begin buying corporate debt and stocks.

Currently, the Fed is forbidden from buying either asset as per the Federal Reserve Act. As such, Congress would need to authorize the Fed to start buying these assets.

The two former Fed Chairs are providing the political cover to do this. I fully expect the Fed to begin outright buying stocks, corporate debt, and other assets within the next six weeks.

Put another way, the Fed is going to begin doing what some call “Weimar-Lite” – or effectively buying everything.

This is why bonds are dropping across the board, despite the clear signs that the financial system remains under MAJOR duress…

Bonds realize that the Fed and other central banks are going to opt for INFLATION to stop the crisis (and I’m not talking about the plain vanilla 2% per year kind). 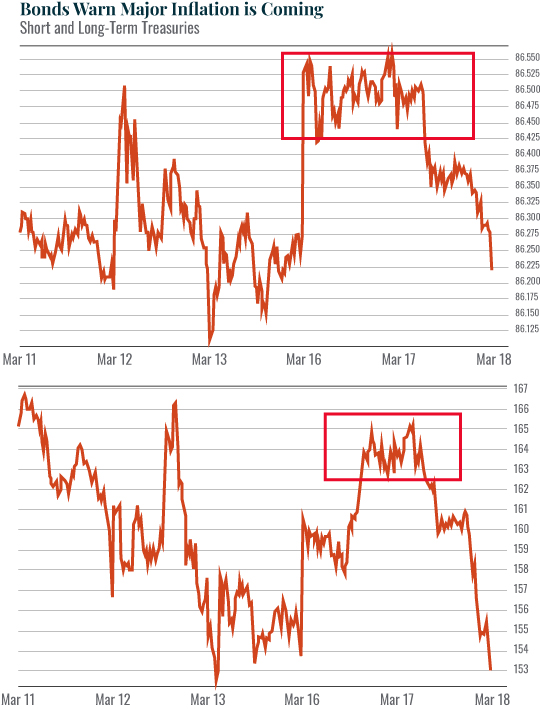 The time to start preparing for this is now.

P.S. Like I said, the Fed is going to need to take DRASTIC measures to have any real impact on the current market. Meaning now’s the prime opportunity for my “Ghost Money” strategy. This strategy is able to help spot what I believe are central market moves – giving you the chance to be among the 1% that have the opportunity to get in on these types of trades. In fact, just a few hours ago my Ghost Money readers locked in a 35% gain in under an hour. Click here to see how to become part of the 1%.