As I warned two weeks ago, the Fed is going to start buying “everything.” AKA “Weimar- Lite.”

The Fed has faced a choice:

OR start buying “everything” in an effort to prop up the system (even if it induces raging inflation).

Going into the weekend, the Fed had already…

And now, the Fed officially crossed the Rubicon. Over the weekend, the Fed announced it would make its QE program “open ended.” Meaning it would buy Treasuries and mortgage-backed securities as needed.

Put another way, the Fed announced unlimited QE. And to top it off, the Fed ALSO added that it was expanding its QE mandate to buy corporate debt (for the first time in history).

The Fed has announced it is going to effectively monetize “everything” – Treasuries, mortgage-backed securities, municipal debt, corporate debt, etc. The only debt assets left are student debt, auto loans, and credit card debt.

In simple terms, the Everything Bubble burst… and now the Fed is dealing with it by buying EVERYTHING.

Whether or not this will work remains to be seen. But this is the NUCLEAR option.

And if it doesn’t work, there is nothing left for the Fed to do.

Remember, technically the Fed isn’t supposed to be able to buy municipal debt or corporate debt. So it is moving FAR beyond its mandate with these actions.

Here’s the even bigger issue…

If this works too well, and with the Fed pumping trillions into the financial system and the federal government launching helicopter money, we begin to see roaring inflation.

The key chart to watch is the credit spread on Junk Bonds. While stocks tried to bounce time and again in the last few weeks, credit had continued to break down, warning that there was no bottom in sight.

If this chart breaks out to the upside, then we will finally get a bounce. We’re more than due for one… 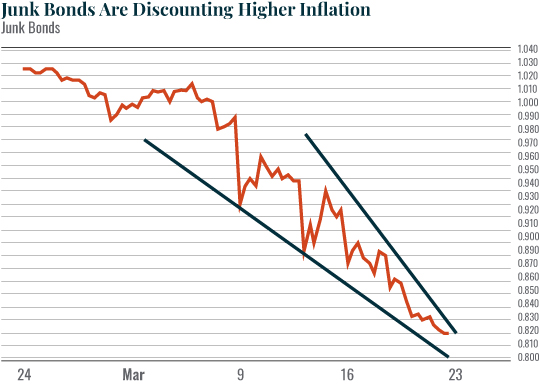 Moreover, the ratio between commodities and stocks has broken out of a multi-year falling wedge, which suggests commodities will be dramatically outperforming stocks going forward.

This too is signaling higher inflation is coming. 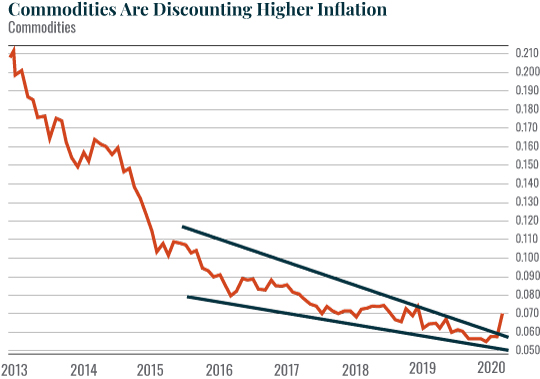 This is telling us that the first round of the crisis, the deflationary collapse, will be ending. But the second round, the INFLATIONARY tidal wave, is only just beginning.

A Rare Look into My Political Crystal Ball

There are times when politics can have a potentially significant impact on investment markets. This election may well be one of them. Here’s how I see it playing out.