Yesterday’s action was quite positive.

Stocks roared higher with the Dow closing up 11% for its largest single day gain since 1933. Across the board, the buying was extremely strong, with 90% of trading volume being up by end of the day.

However, we are not out of the woods yet.

As Wall Street veteran and market strategist Bill King recently noted, throughout history there are two only two other instances in which stocks crashed this rapidly: the crashes of 1929 and 1987.

The crash of 1929 saw stocks lose 34% in the span of a few days before staging a massive two-day rally of 18%. Stocks then dropped to new lows.

The crash of 1987 saw stocks fall 22% in a single day. They then staged a massive two-day rally of nearly 20% before falling to retest the lows.

I’m giving this history lesson for an important reason. Yesterday’s massive bounce doesn’t mean the lows are in. We are still in “watch and wait” mode for the markets.

Credit Warns: Stocks Aren’t A Sure Thing Just Yet

On that note, high yield credit spreads have broken out of their downtrend. However, they have MAJOR resistance right overhead. That HAS to be broken for this rally to have any legs. 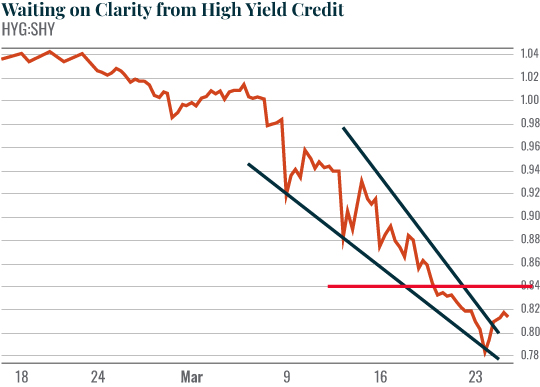 Investment grade credit spreads – which have lead credit during this bounce, courtesy of the Fed announcing it will start buying investment grade corporate debt – have already slammed into resistance and rolled over. 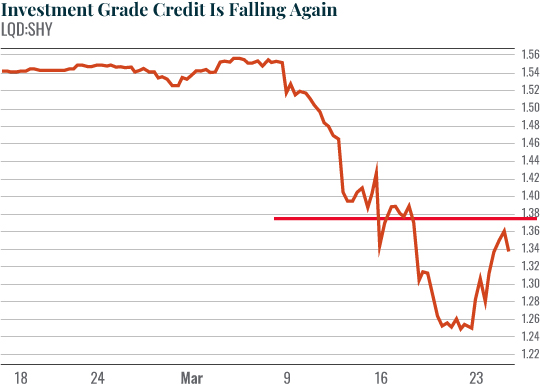 My point with all of this is to NOT rush into stocks right now.

Do not worry about trying to catch a bottom or timing the exact low on the markets. You’re much better off waiting for clear signals that the market has DEFINITIVELY bottomed… and THEN start buying.

Reader Mailbag: My Road Map for Silver… and Inflation

I’ve received a number of questions about silver. Here’s what you need to know…