This marks the second consecutive Monday stocks will open in the green, following two horrifically bad weekend sessions that saw stocks open limit down or close to limit down (March 2 and 9).

In the simplest of terms, the panic in the markets appears to be abating. It is clear stocks have broken the downtrend from the panic (dark blue lines below).

What is not clear is whether this rally will continue or not.

Stocks stalled out under resistance (red line below) last week. A break above that line would open the door to a run to 3,000. 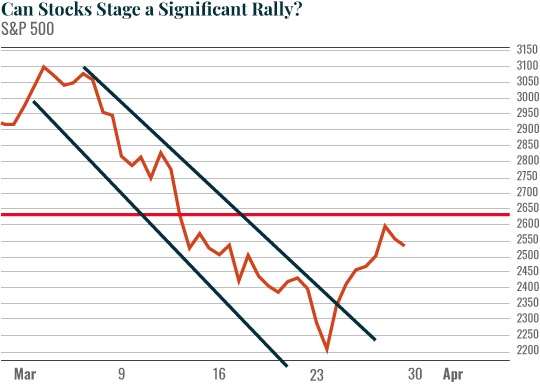 At the end of the day, stocks are actually a minor player. The fact stocks have rallied 17% doesn’t mean we’re out of the woods yet.

The BIG story is what happens with the bond markets.

The Fed’s Attempt to Stop the Debt Crisis

Going into last week, it was clear the financial system was facing a debt crisis. Across the board, from corporate to municipal, bonds are breaking down in a catastrophic fashion. 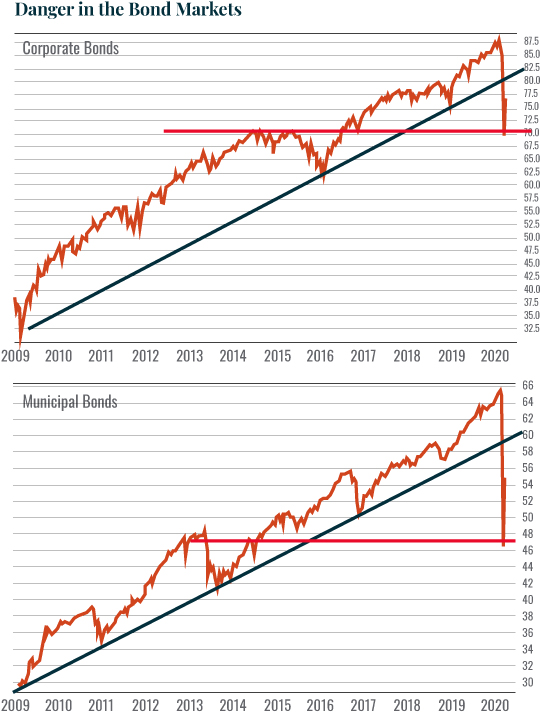 The Fed managed to stop this massacre by announcing it would backstop everything.

The question now is whether that will be enough.

The Unintended Consequence of Print Trillions of Dollars

Bonds have staged a major bounce in the last five days… but what happens if they turn down again?

Will the Fed’s announcement that it intends to buy corporate bonds be enough to stop the $10 trillion corporate bond bubble from imploding?

What about the $16-$19 trillion commercial real estate market? Will the shutdown, which has closed so many restaurants and retailers, result in a crisis in this market as businesses begin skipping monthly payments or breaking contracts outright?

What about the $23 trillion U.S. treasury bubble? Will the $2 trillion in stimulus, which both the president and the Democrats have suggested will be the first of several, be what finally pushes the U.S.’s debt loads into a crisis?

We don’t have answers to any of these questions yet.

Indeed, the only thing of which we CAN be certain is that the Powers That Be are going to address ALL of this by printing money. And that is going to induce higher inflation.

In fact, gold is already telling us this is the case.

Strength in gold discounts inflation. Note that gold has broken out against the $USD, the Japanese Yen, and the Euro. 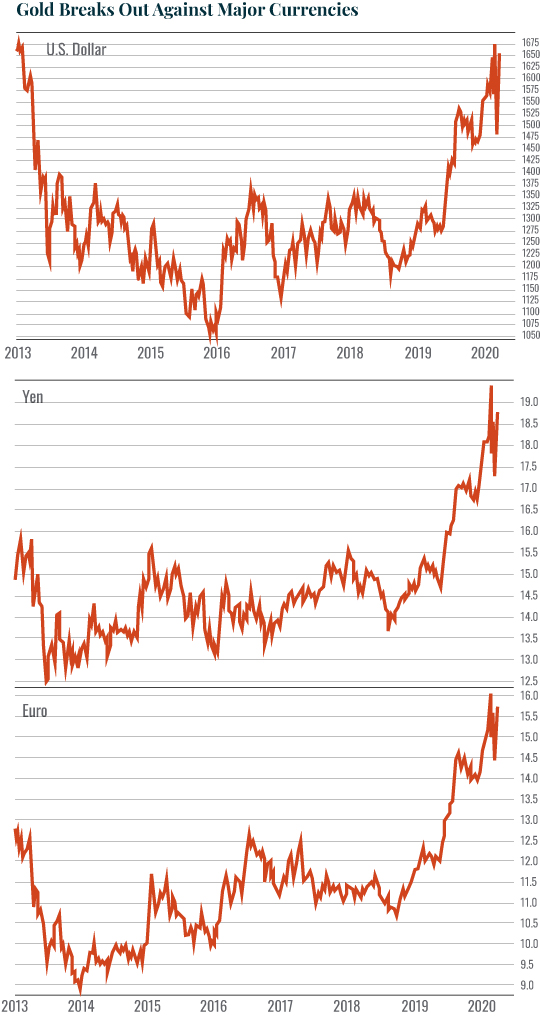 This is a clear signal that the next bull run in gold is beginning now. And higher inflation is coming.