Every other day we’re getting bombarded with new projections about the numbers of deaths and infections from the coronavirus. This is truly scary stuff, even if the situation is improving.

On top of this, we’ve got an economic collapse triggered by the shutdown of the economy. Today alone, we saw jobless claims hit a jaw dropping 6.6 MILLION!

And finally, we’ve also got the truly staggering bailouts/stimulus programs being pushed by the government and the Federal Reserve. As it stands, we’re talking about $6 trillion and counting between all of these different efforts.

This is a mind-boggling amount of information. And we’ve got countless experts and talking heads appearing in the media attempting to explain the significance of these things to us.

So like I said, let’s put the world on “mute” right now. There’s simply too much noise for us to get a clear picture of what’s going on.

For me right now, I’m focusing on just one thing.

“The Canary in the Coal Mine”

Investment grade credit spreads measure the difference between the yield on high quality corporate bonds and the yield on Treasury bonds.

Think of it this way… lending your money to a corporation, even a high quality one, is a lot riskier than lending it to the U.S. government. At the end of the day, the government can print money to pay you back. The corporation cannot. 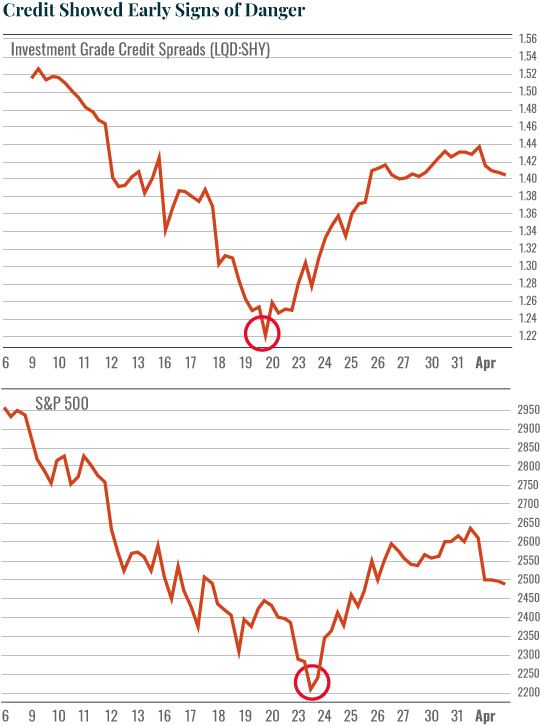 So if these same credit spreads collapse now, despite the Fed buying them, then we know the Fed has failed to prop up the system and we’re going to see an even larger crash.

With that in mind, yesterday’s breakdown was extremely dangerous for the credit markets. As you can see in the chart below, the drop brought credit right to the line of CRITICAL support.

If we see a breakdown from here, then it’s HIGHLY likely the system will go back into a panic and we will see new lows for stocks. 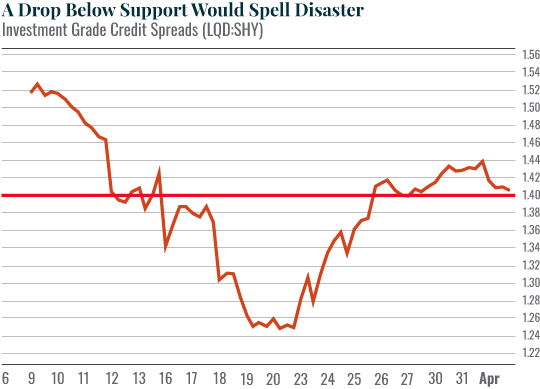 This is the only chart I’m watching right now. I’ve got the rest of the world on mute. You should do the same.

The Federal Reserve meets tomorrow and Wednesday of this week. The markets are forecasting the Fed will cut rates three times this year. If this proves to be the case, it will represent one of the most rapid U-turns in Fed policy in history.

Part 3: The Biggest Opportunity in the Markets Today