Well that adage is particularly true when it comes to central bankers.

During the last few weeks, officials at the Federal Reserve have repeatedly stated that the U.S. economy and markets are not in serious trouble.

Fed officials have stated that the jobs market “is not in a free-fall” and that “further coronavirus stimulus bills may not be needed.”

Other Fed officials have been “upbeat” about the economy, and a Fed study claimed that the efforts to slow the COVID-19 pandemic have not depressed the economy.

Those are pretty confident statements coming from the Fed… particularly when you consider that the Fed’s actions indicate it is in an absolute panic.

As a result of this, the Fed’s balance sheet has gone vertical, to a new all-time high of $5.8 trillion. To put that amount into perspective, it’s larger than the GDP of Japan, the third largest economy in the world. 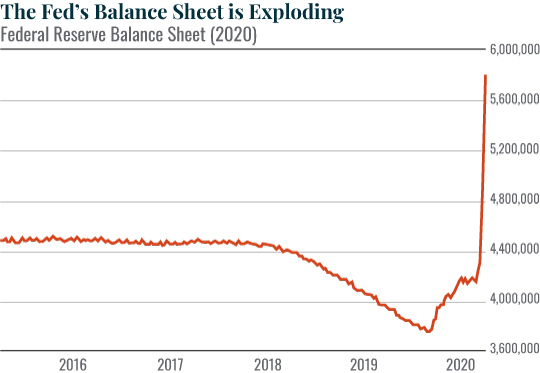 By the way, that $1.3 trillion is the largest monthly increase in the Fed’s balance sheet since Lehman Brothers collapsed at the depth of the 2008 crisis. 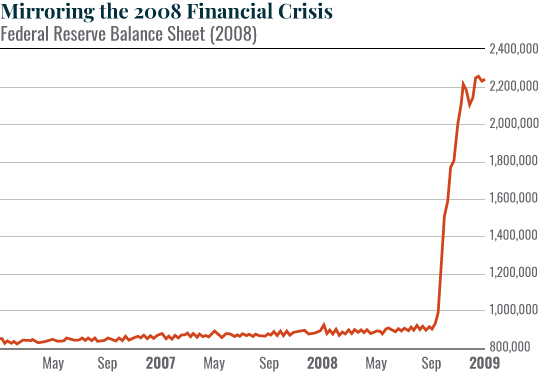 So my question to the Fed is this…

If things are going fine and you’ve got this situation under control… why are you printing money at a pace not seen since the worst month of the worst financial crisis in 80+ years?

This just confirms what I’ve been arguing since 2008. The Fed can never stop intervening in the markets.

Once a central bank begins using extraordinary monetary policies to prop up the financial system, those policies quickly become normalized. Meaning the system NEEDS them to continue forever.

Put another way, I believe the Fed is going to be forced to intervene in the markets more and more going forward. Fed officials can say whatever they like, but as long as the Fed is printing money by the hundreds of billions of dollars per week, the real story is that the Fed is the only game in town.

Look, these corrosive Federal Reserve market manipulations are going to happen whether we like them or not.

So in the short term, you might as well make money from them.

That’s given subscribers the chance to collect proven gains of up to 61% in as little as two hours… with the chance to do it again week after week.

I just uncovered a smoking gun… One that, if correct, reveals that the Fed has something truly sinister planned for the President…