Have you ever heard of the “rope a dope”?

It’s a boxing strategy, most famously used by Muhammad Ali in his legendary fight against George Foreman, The Rumble in the Jungle.

Going into the fight, Foreman was an unstoppable knockout machine. Arguably one of the hardest hitters in heavyweight history, Foreman routinely put dents the size of bowling balls in his 100-lb+ punching bags.

And with a record of 40 wins and 0 losses, it was thought that Foreman would wreck Ali, who was lighter, a softer puncher, and who had already suffered two defeats.

Instead, Ali recorded one of the greatest upsets in boxing history.

First and foremost, he came out swinging, going on the attack. No one, not even Foreman, expected this and it resulted in Ali landing a number of punches that enraged Foreman.

Once he’d gotten his opponent good and furious, Ali then employed the “rope a dope” technique – leaning against the ropes of the ring and pulling Foreman against him, smothering the latter’s attacks while Foreman swung away with rage.

It didn’t help that Ali was trash-talking the entire time, asking Foreman if “that was all you got?” and telling him “they told me you could punch George!”

It was an extremely dangerous strategy. One slip-up and Foreman would land a clean head shot and it’d be “lights out” for Ali.

However, due to his impeccable defense and his ungodly ability to take punishment, Ali was a human punching bag for eight rounds. And Foreman became completely exhausted.

By round eight, Foreman was barely able to swing his arms. And that was when Ali began to attack, hitting Foreman with devastating combinations until he KO’d his opponent in the center of the ring.

Of course, I could talk boxing all day, but I mention it here for a specific reason.

I was thinking about the “rope a dope” while looking at the markets today.

Hasty Investors Are on the Wrong Side of the Ring

The markets are bouncing in a big way. The broad indexes are up ~20% from their lows, while some individual stocks have rallied as much as 50%.

This reversal has got many investors thinking the bull market is back, and the bear market is over. And much like George Foreman during the Rumble in the Jungle, these investors are overly confident and running into a trap.

The reality is, there is only one environment in which stocks rally 20% in a number of days…

The fact that stocks have bounced this much doesn’t negate the damage done to the financial system. Simply take a look at municipal bonds to see what I mean.

The entire municipal bond market is $3 trillion in size. For context, stocks are well over $18 trillion in the U.S. alone.

The Fed has announced it will buy municipal bonds with “unlimited funds.” And yet, these bonds have not only failed to break out to new highs, but they’re in fact rolling over! 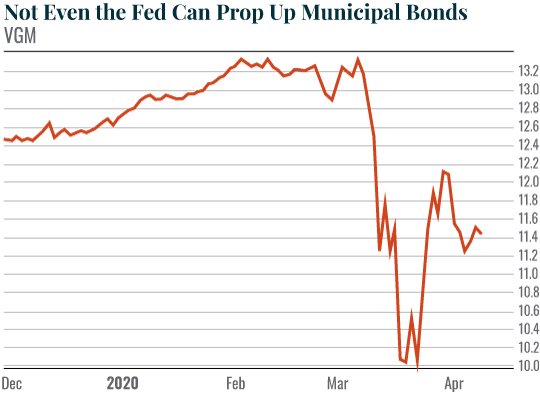 So the Fed announced it is going to be buying one of the smallest debt markets with unlimited funds… and yet those same debt instruments can’t sustain a rally for more than a few days?

What does that say about the true state of the financial system?

It says that the financial system is in REAL trouble. And those who are betting big on a roaring recovery are liable to find their investment accounts KO’d – just like George Foreman.