Right now, the financial system is trying to figure out what happens when an unstoppable force meets an immovable object.

The unstoppable force: the Everything Bubble bursting as debt markets collapse around.

The immovable object: the Federal Reserve and its decision to buy EVERYTHING.

I’ve shown a version of the chart below. It is critical that we keep this in mind at all times. This is what forced the Fed to act.

You are looking at a debt panic: a time in which debt markets across the board begin to collapse. And given that we’re talking about roughly $14 trillion in debt here ($10 trillion for corporate debt and $3.8 trillion for municipal bond debt), this was a truly systemic risk.

In an effort to stop that debt panic, the Fed announced several weeks ago that it would be buying everything. And I do mean EVERYTHING.

We are now in the process of watching to see if the Fed has succeeded or not. That is… has the Fed’s move to back stop the entire financial system been enough to stop the panic.

Thus far the answer is a resounding yes.

However, the bigger issue (the one that may lead to a second round of the crisis) is this:

What is the actual economic damage caused by the COVID–19 panic and subsequent economic shutdown?

Waiting for An Uptick in Consumer Demand

Throwing trillions of dollars at the financial system doesn’t mean that consumer spending is going to come back in a major way.

Put another way, if the consumer doesn’t come back in a BIG way relatively quickly, then we will indeed find ourselves in a significant, prolonged recession.

And that would trigger another round of the financial crisis.

Having said that, we have to invest based on reality, not hypotheticals. And the reality is that the markets have finally given me the signals I was waiting for to indicate its time to move back into stocks.

Credit Has Given Me the “All Clear”

Personally, I’ve been waiting for two things to happen to issue the “all clear” in the markets.

I wanted to see:

The credit market is MUCH larger and more sophisticated than the stock market. As such, credit is much more closely aligned with the real economy. And credit typically signals major changes in the financial system long before stocks catch on.

By way of example, credit picked up on the corona–collapse weeks before stocks did (red circle vs. blue circle in the chart below). 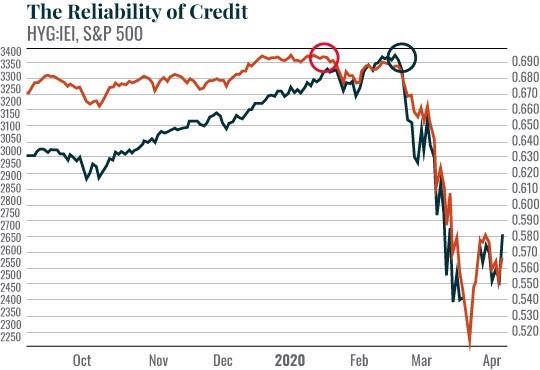 Remember, the systemic issue for the Fed was the debt/credit markets. So if these markets rally significantly, it indicates that the system is returning to normalcy.

For me, normalcy is seeing a sharp reversal and a rally that involves an investment closing any large gaps that were opened during the meltdown. (By the way, a gap is when an investment opens sharply lower leaving a hole in its candlestick chart.)

The first has now happened. Investment grade credit has broken out to the upside closing the large gap that was opened during the panic selling in March. 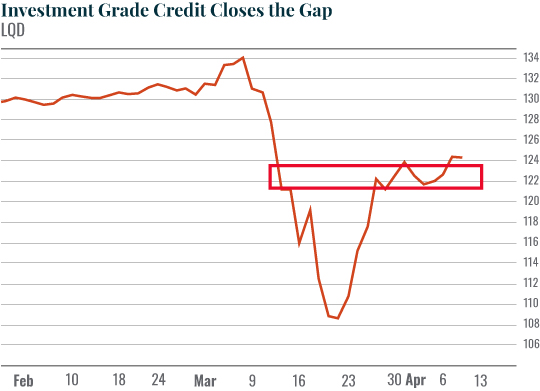 The second item is about to happen. High yield credit has also begun to rally and is about to move into the gap opened during the panic selling in March. 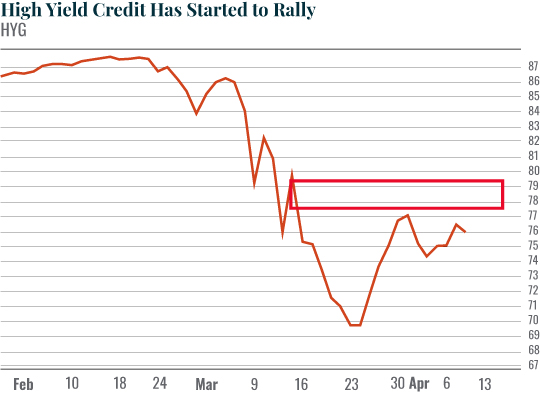 Does this mean there won’t be another round of panic?

No. I am not a psychic. No one is. We have no idea what might happen in the future.

However, the above charts indicate that in the near term, things are returning to normal and stocks should continue to rally.

In light of this, I am comfortable having us move back into the markets. However, we need to steer clear of industries that will not be coming back from this crisis (hotels, cruise lines, casinos, etc.).

Slightly Choppy with a Chance of Breakout

Range-bound stocks may be getting ready to make a move