The Fed just announced that it is going to attempt to create the Mother of All Bubbles.

So that’s $2.3 trillion in additional funding. To put this into perspective, this is larger than the GDP of Brazil.

This comes after the Fed has already announced it would:

So the Fed is now effectively backstopping every asset class on the planet.

The only thing left for the Fed to do is announce that it is going to begin buying stocks directly (though it is already doing this in the sense that it is buying corporate bond ETFs that trade on the stock market).

As a result of this, the Fed’s balance sheet has EXPLODED upwards by nearly $2 TRILLION (with a “T”) in the last six months. And that’s NOT including the additional $2.3 trillion the Fed said it would be printing to pay for its new monetary programs.

As I write this today, the Fed’s balance sheet is over $6 trillion in size. If the Fed was a standalone country, it’d be the third largest in the world behind the U.S. and China. 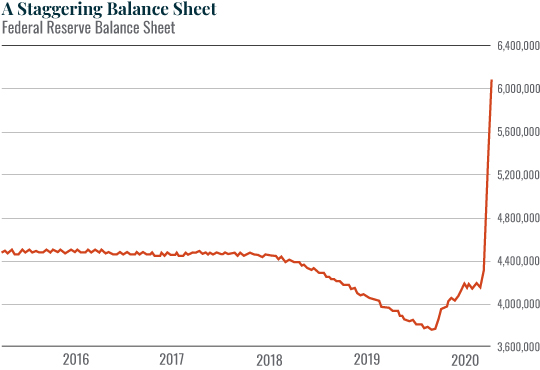 If the Fed balance sheet can hit $6 trillion, why not $8 trillion or even $9 trillion?

Back in 2017, I wrote in my book The Everything Bubble: the Endgame For Central Bank Policy that I expected the Fed’s balance sheet to hit at least $8 trillion. But by the look of things, it could go much higher.

Put simply, the Fed is printing a staggering amount of money. And it could induce the MOTHER OF ALL BUBBLES: a situation in which stocks go to EXTREME highs while the economy collapses.

I’ll outline how this will work in tomorrow’s article. Until then…