Yesterday’s article caused quite a stir.

If you missed it, the central argument was that the Fed was going to create the Mother of All Bubbles.

By way of explanation, a bubble happens when the stock market disconnects from economic realities.

This process was already underway back in October 2019.

At that time, the stock market was in the process of a melt–up. This was based on the fact that the Fed was engaged in a $60 billion per month quantitative easing (QE) program, combined with multiple repo programs — all while the economy growing.

Put another way, back in October 2019, the economy was relatively good, but the Fed was printing so much money that even large $1 trillion companies such as Microsoft (MSFT) were going parabolic.

MSFT is a $700 billion company rising 45% in six months to $1.3 trillion in market cap. At a time when the economy is growing, but not roaring. That is BUBBLE type behavior. 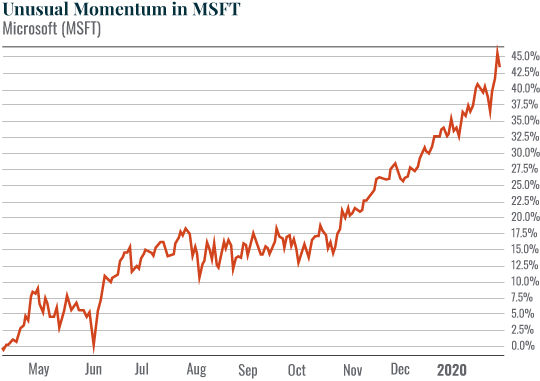 Well, the disconnect between the economy and the stock market today is even larger. If that was a bubble or sorts, the current environment is even more bubbly.

The Mother of All Economic Bubbles

The real economy is in a DEEP recession.

Unemployment is already at 10% if not higher.

To deal with this situation, the Federal Reserve has already printed over $2 trillion and plans to print over another $2.3 trillion.

That money has to flow somewhere, and a lot of it will flow to stocks. Indeed, the stock market is already up nearly 30% in the last three weeks. This took place while the U.S. economy completely imploded.

That, my friends, is the definition of bubble behavior.

And while stocks might correct in the short term, I wouldn’t be surprised to see them at NEW all–time highs before this time next year.

After all, if the Fed balance sheet can hit $6 trillion, why not $8 trillion or even $9 trillion? And don’t forget…

The Fed has stated it plans on running these policies even after the economy stabilizes!

On April 9, 2020, Fed Chair Jerome Powell made the following comment during his webinar with the Brookings Institute:

“We will be in no hurry to pull back on our asset purchases or on these programs… We will make sure the economy is really on solid footing before we start pulling back. When we pull back we do so very gradually.”

So the Fed plans on backstopping the financial system — even after the economy starts to rebound.

This is the kind of environment in which bubbles are made. And it’s going to force some stocks to levels you won’t believe.

I’ll tell you about them tomorrow.

“One of the Greatest Investment Opportunities of All Time”…??

In the name of national security, President Trump is sparking an economic boom.