Unlimited Bond Buying: What That Means For You

Central Banks have spoken… and they are saying three words.

The key word here is “unlimited.”

In the last six weeks, the Fed, the Bank of Japan, and the European Central Bank (ECB) have all issued statements saying they are prepared to buy “unlimited” amounts of bonds.

This is quite a statement.

If you’ll recall, after the Great Financial Crisis of 2008, most bond buying programs (quantitative easing or QE) were in fixed amounts. There was the Fed’s $1.25 trillion QE 1 program, its $600 billion QE 2 program, etc.

When those fixed QE programs didn’t resolve the underlying tension in the financial system, central banks moved away from fixed amounts and deadlines to “open-ended” QE programs – programs that would run as long as the central bank thought it was necessary.

This was the case with the Fed’s QE 3 program, which ran for more than TWO YEARS straight.

However, even that pales in comparison to what the Fed and other central banks are saying today. Today, they are saying they will buy “unlimited bonds.”

Unlimited… as in potentially all bonds. As in… nationalizing the bond market.

Bear in mind, these “unlimited” bond buying programs don’t have timelines, so they are open-ended in nature or can run continuously.

The implications here are:

Put simply, central banks are stating, “We are ready and willing to buy anything with unlimited funds to reflate the financial system.”

Stocks have held up reasonably well despite a rash of truly horrific news.

In the U.S., there are now 26 million unemployed. According to the U.S. Chamber of Commerce, 54% of small business are believed to have closed during the shutdown. And 24% have stated they are less than 60 days from going out of business permanently.

Bear in mind, that information was published April 3. We’re already over 20 days into that 60-day window.

Again, this is horrific, economic DEPRESSION type stuff. And yet stocks refuse to drop.

While this may or may not work for stocks, it will most definitely work for precious metals.

Small wonder then that gold is breaking out against major currencies. 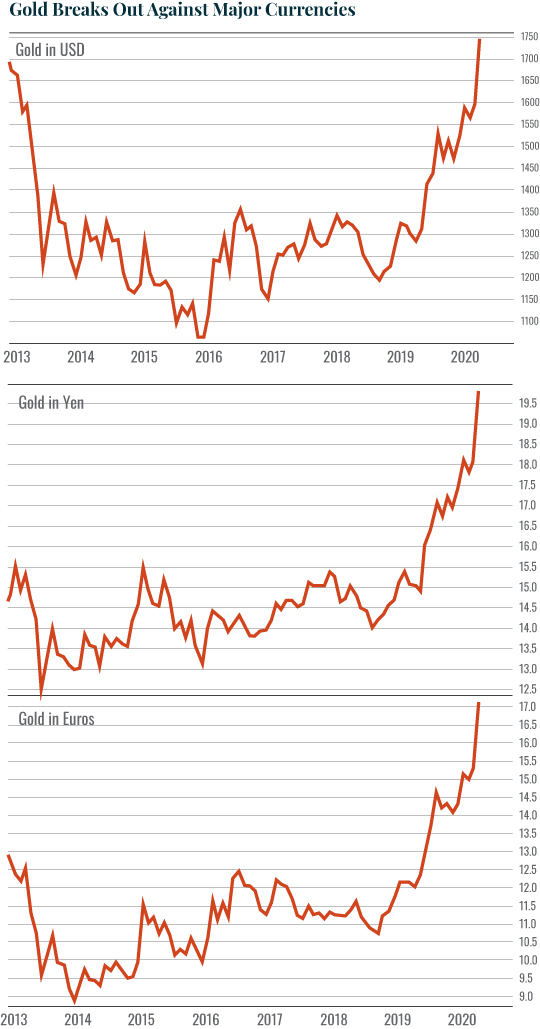 Many methods of investing in gold, or even silver for that matter, will cause as much pain as the rest of the markets. It must be done properly, in order to protect your wealth and not leave you stuck with no way to liquidate your position.

You need real, hold-in-your-hand gold and silver to get the protection your investments need right now.

That’s why I believe, hands down, one of the best ways to buy, sell, and trade gold today is with an account from…

In fact, we trust them so much we bought a stake in their platform.

It’s easy to set up. Easy to use. And better yet, setting up your account is free.

I say this with as much urgency as I can muster: Consider opening an account and put a portion of your assets in gold.

This pandemic is downright biblical, so you need an asset that has passed the test of time since before the Bible was even written. Especially now that it’s experiencing a bull market of its own, as the chart above suggests.

This is one of the best strategies on the market I’m seeing to survive and thrive during the global pandemic.