Yesterday I mentioned that the market was approaching “the line in the sand” — the 61.8% retracement of the March meltdown.

A big problem with major market crashes is that they render most technical metrics useless. Meaning whenever the market drops violently, most of the measures that traders use to time when to buy or sell (things like relative strength, MACD, and such), stop working as trading tools.

For this reason, one of the few technical indicators that remain helpful after a crash are Fibonacci retracements percentages. These are based on the famous Fibonacci ratio (with the exception of the 0.5% which was simply added by traders for its predictive value).

From a predictive standpoint, historically, most major crashes see stocks retrace 61.8% of their initial decline before rolling over and crashing again. If stocks CANNOT break above the 61.8% retracement, they are doomed to crash to new lows. As such, the 61.8% retracement is “the line in the sand.”

A Crucial Moment for Stocks

The stock market managed to break above its 61.8% retracement briefly yesterday. 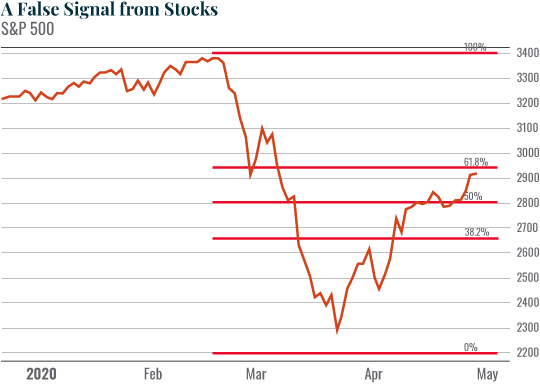 From a technical analysis perspective, breaking above a 61.8% retracement usually means that the rally is no longer just a bounce but the start of something bigger.

However, for this to work out, we need stocks to break above the retracement and stay there. And as of this morning, this was not the case.

The Fed has promised to keep rates at zero until the economy is back at full employment. Trillions of dollars have been funneled into the financial system by the Fed and the government’s stimulus package. Unemployment numbers are horrific, but the pace of the claims is slowing.

Now is the time for the bulls to assert their strength and push the market above its 61.8% retracement with conviction. This is particularly true given that it is the last day of the month and fund managers need to mark their holdings at the best possible numbers after a horrific March showing.

So… will they do it?

We’ll have to wait and see.