Stocks are rallying hard today, but are struggling to break above resistance (red line in the chart below). 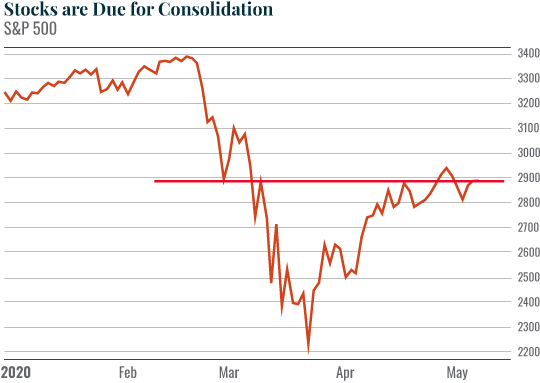 This suggests that the rally is tired and due for consolidation.

We have had two similar phases since the markets bottomed on March 23. They happened from March 31 to April 6, and April 20 to April 27 (red boxes in the chart below). 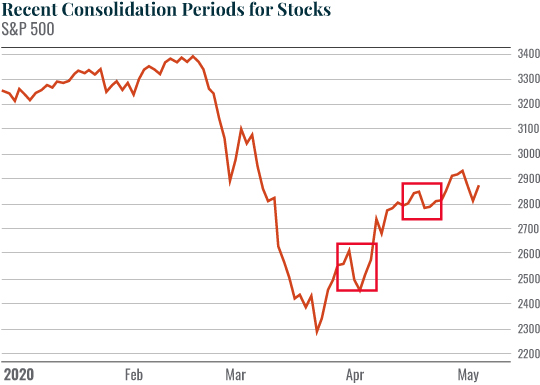 The big question for investors is if this is a buying opportunity or the start of a major drop.

A Message from Credit: “Be Patient”

Credit typically leads stocks, and credit is coiling for a big move.

You’ll note in the chart below that credit began to struggle in early April. Stocks rallied through that month despite this weakness.

Right now, credit has major support just below current levels (red line in the chart below), which suggests the move should be upwards. But given that we’re approaching the weekend and traders are extremely long and looking to unload those longs, this setup isn’t clean enough to warrant putting more capital to work. 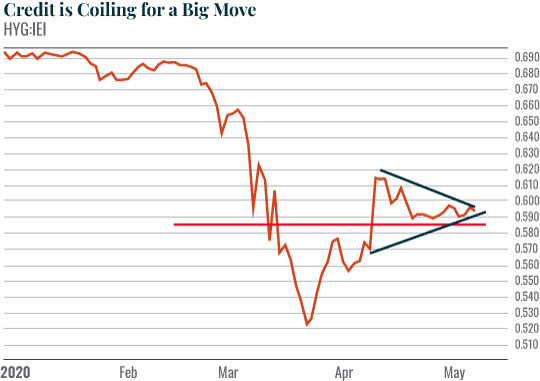 One of the most important adages for professional traders is “when in doubt, stay out.” With that in mind, given the muddiness in the markets, I’d suggest waiting for a breakout before committing more capital to stocks.

The US economy experienced a sharp and severe recession/depression following the economic shutdown due to the COVID-19 pandemic. And yet, stocks are exploding higher. Why is this?

Thus far, we’ve focused on the Fed’s side of this war. Today we’re going to look at President Trump’s “plan of attack.”