Our timing on these topics could not have been better.

The market showed us the significance of both resistance (red line below) and support (green line) several times last week. And as I write this Monday morning before the market opens, stocks have just broken out above resistance. 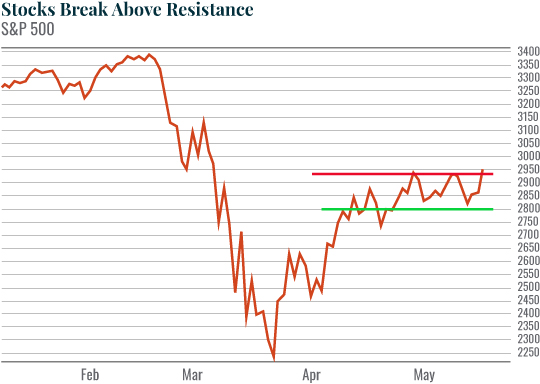 This represents a new trading term we’ve yet to cover: “the breakout.”

Breakouts occur when an asset breaks above or below a particular line of importance (resistance or support). We are seeing one occurring in the stock market this morning – stocks are breaking out above the resistance line we’ve been tracking for the last week.

There are two types of breakouts: confirmed and false.

For instance, if the line was a line of resistance, a confirmed breakout will feature that line becoming a form of support. Meaning the very line the market had a difficult time breaking above is now holding the market, or supporting it.

I’m talking about a move that would look like this: 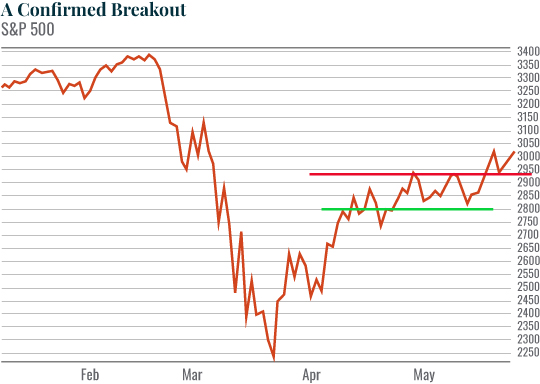 By way of contrast, a false breakout occurs when an asset breaks above or below a line of significance and is UNABLE to stay there. When this happens, the asset typically reverses hard and then moves violently in the opposite direction.

I’m talking about a move that would look like this: 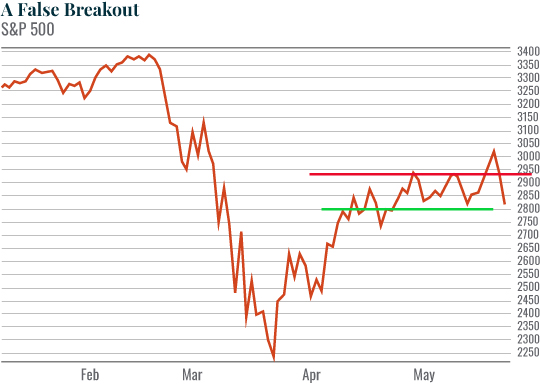 For this reason, a lot of professional traders I know refuse to buy breakouts.

Instead, they wait to see if the breakout is confirmed or false. Doing this ensures that they only trade setups that have a high probability of success.

As I wrote earlier in this piece, stocks are staging a breakout this morning. Will it be a confirmed breakout or a false breakout? I don’t know. No one does. But the pros I know won’t be trading much until they know the answer.

I suggest you do the same.