The big news this morning is that payrolls grew by 2.5 million in May.

Yes, for the first time in a while I wrote the word “grew” — as in 2.5 million people were hired last month.

This comes on the heels of truly depressionary unemployment numbers in March and April. According to some data, as many as 40 million Americans have filed for unemployment since late February 2020.

This May data suggests that trend is ending and that the economy is rebounding AGGRESSIVELY.

Of course, one month doesn’t make a trend. And it will be interesting to see how June and July’s numbers hold up.

But if this data from May is not a freak occurrence, it indicates that the stock market was CORRECT to discount a sharp economic rebound was coming.

In terms of investing today, we should start to see some rotation take place.

An Important Shift in Capital

Rotation is when capital moves from one sector to another. Typically, it consists of capital moving from winning industries to industries that are lagging behind.

In our current market, this would mean money moving from tech and semiconductors into things like cruise lines, theme parks, airlines, and other laggards.

Let me show you an example.

JPMorgan (JPM) is the largest bank in the US.

Take a look at how JPM shares (black line below) have performed relative to the performance of the FANG stocks (Facebook, Apple, Netflix, and Google as depicted by the red line) since the March lows and you’ll see what I mean by “lagging.” 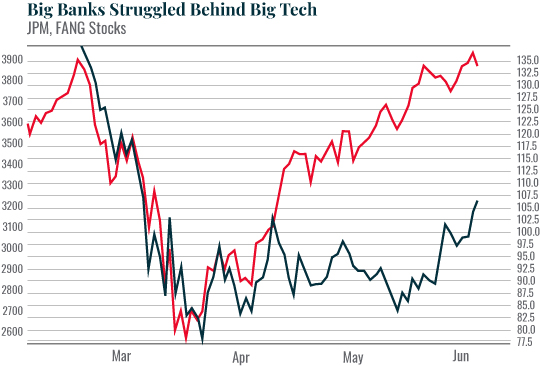 However, from a technical analysis perspective, JPM looks ready to rocket higher.

The bank’s share price has just broken above critical resistance (red line below). And if indeed the economy is improving greatly, then banks like JPMorgan should do very well (they profit from economic growth via their loan portfolios). 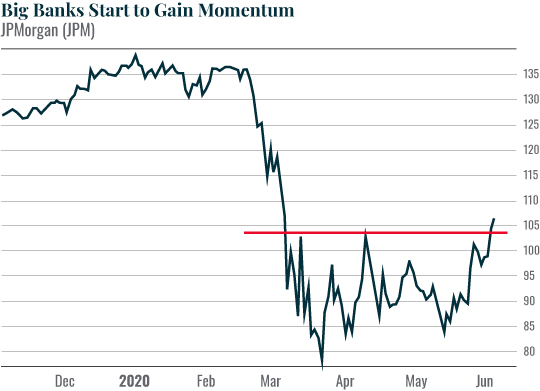 Now, I’m NOT saying to go out and buy JPM today. But this is a great example of how the markets work: capital rotates from one sector to another based on new developments.

In terms of specific investment ideas to consider today, I recently told subscribers of my Strategic Impact newsletter about nine investments that could outperform the broader stock market as the economy reopened.

As I write this Friday morning, several of our current open positions are winners — some of them already in the double digits.

To learn more about investment ideas like these and secure your opportunity to see how to profit… click here.

A tsunami of liquidity is also about to hit the global markets.