Right now, above all else investors need to be thinking about “unintended consequences.”

Everyone knows that the Fed has flooded the financial system with liquidity. This liquidity, combined with what appears to be a “V” shaped recovery in the economy, is what propelled stocks to go straight up from the March lows.

As I write this Tuesday morning, the S&P 500 has broken out of a rising wedge formation (blue lines in the chart below) to the upside. It is now slamming into overhead resistance (red line in the chart below). It is unlikely we would break this on the first try.

A drop to retest the breakout would be perfectly normal. I’ve drawn what this would look like with a red arrow in the chart below. 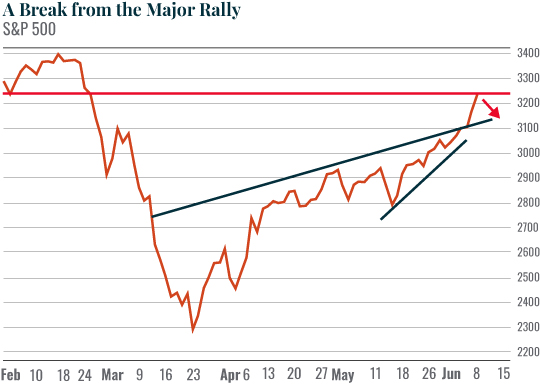 So… stocks rally on liquidity as the Fed reflates the system. That’s the obvious consequence of the Fed printing $1 trillion a month. But what is the unintended consequence of this money printing?

The market is suggesting it could be a crash in bonds.

The Darker Side to Major Stock Momentum

The US was already on schedule to run a $3–4 trillion deficit this year based on the March–May economic shutdown. However, it is growing clearer that the real number is going to be even higher than that.

Multiple states (NY, CA, IL) are on the brink of insolvency and will need bailouts soon. And the president has suggested he’d like a massive infrastructure bill passed this year as well.

Either of those could mean the US needing to issue $5–6 trillion in NEW debt this year… on top of rolling over its old debt.

The bond market is signaling this might be too much for it to absorb at current levels. The chart below proves this. 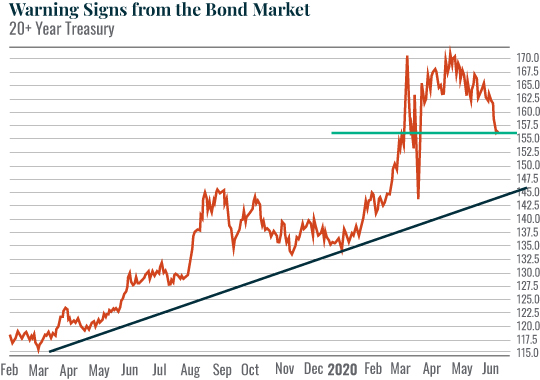 A bond crash would mean the bond market revolting against the federal fiscal stimulus. And it would have a profound impact on ALL risk assets — including stocks.

So while it’s nice to see stocks rallying so much, we need to consider what might be coming down the pike in the near future. Bonds suggest it’s nothing pretty.

I’ll outline an investment you could use to profit from this in tomorrow’s article.