Are you starting to get frustrated?

The last four months have been extremely frustrating. Regardless of your political affiliation or personal views on things, you have to admit that 2020 has been a brutal year.

In the last four months, Americans have been told:

Whether or not you agree with these policies, they are frustrating to deal with. And they make you realize just how much we often take for granted.

For instance, even basic freedoms like going to the grocery store have become ordeals in which you have to wear a mask, walk a certain direction down certain aisles, and avoid getting within six feet of other shoppers.

It’s enough to make anyone get frustrated, if not outright angry.

But anger is useless if there’s nothing you can do about a situation. One of my best friend’s favorite sayings is: “If being angry makes the situation better, go for it. If not, you’re wasting your time and unpleasant to be around.”

That’s something I’ve come to believe is 100% true. And it’s become a personal mantra for me during the last three months.

Which is why whenever I find myself starting to get frustrated, I’ve chosen to channel that energy into something positive – whether it’s working out, calling an old friend I’ve haven’t spoken with in some time, or something else.

What I’ve found is that if I can get myself engaged in an activity that is positive for at least five minutes, my frustration goes away. I’m then happier as a person, a lot more pleasant to be around, and accomplishing more.

This is especially true with investing.

The market can be an extremely frustrating place. And sometimes if feels as if stocks move in such a way as to inflict the maximum amount of suffering on the greatest number of investors.

Take a look at the price action of the last four months. You want to talk about frustrating? The market has collapsed and then exploded higher multiple times, whipsawing investors and their portfolios. 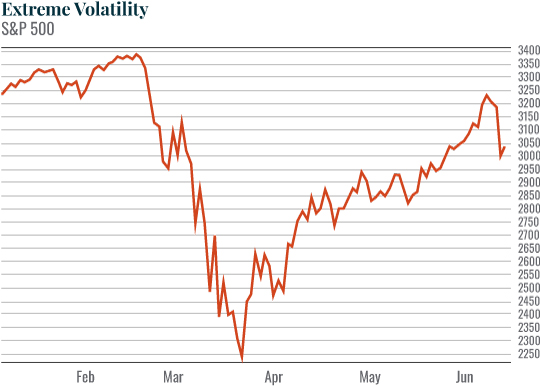 If you were attempting to invest in this climate based on what the market was doing, you probably got outright angry AND lost a lot of money over the last four months.

I know I would have… if I hadn’t learned to use strict discipline years ago.

Discipline takes emotions out of investing. And that means greater results and greater quality of life.

One discipline I’ve found that works for investors (not day traders) is the 50-week moving average (50-WMA), something I’ve discussed before in the pages of Money & Crisis.

The 50-WMA is the sum of the market’s weekly closing prices over the prior 50 weeks, divided by 50.

Looking at the chart below, you can see that if you got out of stocks whenever the S&P 500 broke below this line, you’d have avoided some of the worst collapses including the March meltdown of 2020 (red circles). 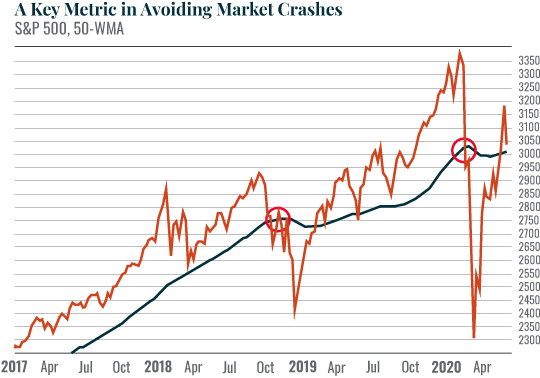 Similarly, if you bought stocks once they broke above their 50-WMA, you’d have caught most of the gains of the last few years (green circles in the chart below). 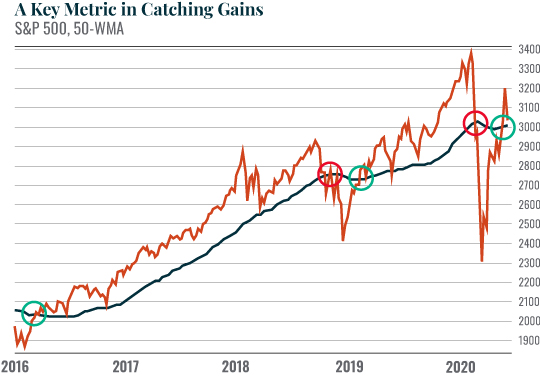 By using this kind of discipline, you’re catching most of the gains and missing most of the losses. Even more importantly, you’re able to let the market “do its thing” without getting angry at the price action.

Put another way, rather than watching the markets day in and day out, you simply check in on them once a week to see whether they broke below or above the 50-WMA.

The rest of the time, you can be doing something else more positive that benefits you and your loved ones.

This is the kind of investing I LOVE – systems that take minimal time to follow and that allow you to focus on what really matters in life.

An Extra Dose of Income

As a professional trader, I’ve been doing this on my own for over 15 years.

It doesn’t matter if you’ve never completed any trade before in your entire life.

It’s a way you could start collecting amounts as high as $10,200… and then see the chance to do it 40 plus times every year.

Even in the crazy times we’re living in.

And the best part?

When you use this simplified technique… it takes a total of about five minutes a week and a few clicks of the mouse.

You’re making money while you’re spending time with the people you love and doing what makes you the happiest.

If any of this sounds impossible to you… I understand.