Americans are scared. Any why shouldn’t they be?

They’ve watched as the elites have applauded riots and mobs destroying offices, businesses, and more. You can’t turn on the TV today without seeing images of burning buildings and angry mobs beating/attacking people.

What’s truly staggering is to see governors and mayors urging the police to “stand down” and allow riots to occur. A country that was founded on the rule of law is rapidly becoming a land of “laws only apply if you have the wrong political beliefs.”

As I wrote to you a few articles ago, we are on our own.

More and more Americans are realizing that when it comes to personal safety, the government is no longer going to be 100% reliable.

And so, Americans are buying guns at a record pace.

The FBI reported 3.9 million background check screenings were filed in June 2020. This is an all-time record since the FBI began tracking this data in 1998 and represents a 71% increase from June 2019 levels.

If you think that’s astonishing, consider that on a state-by-state basis, the number of background checks more than DOUBLED for 42 states year-over-year for the month of June.

This is not a left versus right issue either. More and more reports are showing that this is a cultural shift that involves EVERYONE on the political spectrum – including anti-Second Amendment liberals.

In Illinois, permit applications have spiked 500% year-over-year for the month of May. Gun safety instructors have been astonished to find that many of their newest clients are anti-gun liberals.

David Lombardo, owner of Safer USA and a concealed carry gun instructor, said he’s had several callers lately who candidly disclosed their political beliefs and asked him for one-on-one training, because “they don’t want anyone to know they’re doing the training, let alone going to buy a firearm.”

“I have seen the emergence of a new class of students seeking training: anti-Second Amendment liberals,” he said. [Emphasis my own.]

In California, multiblock long lines are forming to practice shooting at shooting ranges. And the people in the lines are from all walks of life, including moms who previously have avoided guns at all costs.

In that line was a South Orange County mom who said she has not owned a gun before.

“I’ve been wanting to do this for a while,” Innessa Solovyev said. “But this is kind of like the tipping point where I needed to protect myself.” [Emphasis my own.]

The stock market has picked up on this cultural shift as well.

In fact, gun manufacturer Smith and Wesson (SWBI) has seen its share price break out of a multiyear downtrend to the upside. 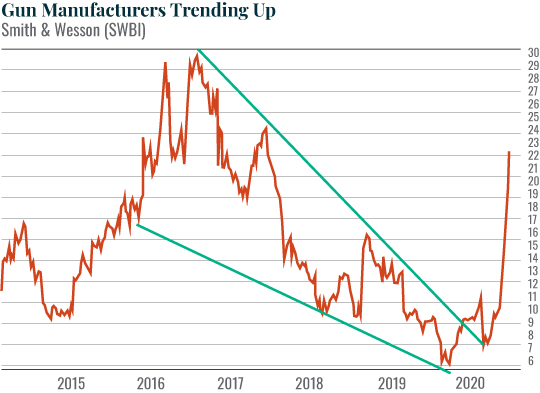 Are you worried about your personal safety? Have you considered buying a gun to protect yourself?

Even if the answer to both is “no” I suggest looking at gun manufacturers as potential investments. This looks to be one of the bigger trends going into the November 2020 elections.