The fact that gold was ripping higher.

As I mentioned, Americans see gold as a measure of inflation. Food prices, car prices, home prices, stock prices, practically the price of anything can rise and the average American won’t think “inflation.”

It’s a different story with gold.

Once gold starts ripping higher to the point that the average American notices it… then everyone and their mother starts talking about inflation getting out of control.

I predicted this would happen back in 2008. It has now happened. And the Fed or someone equally important took notice.

Gold got SLAMMED yesterday via a clear intervention.

I say it was an intervention because the drop occurred on no news and featured a dramatic drop in a very short time period. By contrast, real institutions and investors don’t want an asset to move rapidly as it destroys the value.

I’ve illustrated the intervention in the chart below. 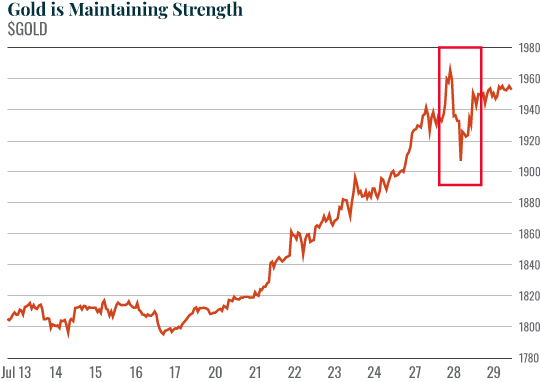 It is clear that the Fed or someone else wants gold to go lower. But thus far it hasn’t worked… gold has regained most of its losses.

Gold has clearly figured that policymakers will be responding to every issue by printing more money. Just last week, the European Union announced a €750 billion ($858 billion) stimulus program. This comes after the ECB printed €1.25 trillion.

Again, the markets clearly see that policymakers will be responding to every issue by printing more money. And this has ignited a major bull market in precious metals.

Position Yourself for Success in Precious Metals

By the look of things, we’re just getting started here.

And subscribers of my Strategic Impact newsletter are locked and loaded…

My subscribers have broad exposure to this sector with unique recommendations that have been EXPLODING higher in the last two weeks.

And we’re just getting started.

The Everything Bubble is Under Extreme Pressure

Today I’d like to take a closer look at what the U.S. Treasury is telling us via yields.