Reader Mailbag: My Road Map for Silver… and Inflation

I’ve received a number of questions about silver. (As always, you can continue to send in your questions and feedback by clicking here.)

Silver, like gold, is a precious metal. And just like gold, silver has been on a tear lately, rising to over $25 per ounce from a low of $14 per ounce in March. 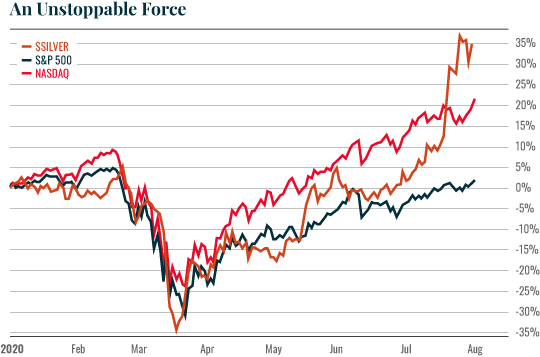 Unlike gold, which is mostly used in jewelry, silver has a number of industrial uses. Because of this, it is tempting to assume silver is moving based on the economy… but this is misguided.

The reality is that silver ONLY makes big moves when inflation is getting out of control. In fact, one of the best measures for roaring inflation is to compare the performance of silver to gold.

During periods in which inflation is rising rapidly, silver typically outperforms gold by a significant margin.

A great example of this occurred from late 2008 until early 2011. The Fed flooded the financial system with nearly $2 trillion in liquidity via its quantitative easing (QE) 1 and 2 programs after the Great Financial Crisis of 2008.

The chart below shows the ratio of silver to gold during that time.

As you can see, from late 2008 and especially from mid-2010 until early 2011, silver outperformed gold by a wide margin. Incidentally, that was the time in which the last significant inflationary spike hit the financial system. 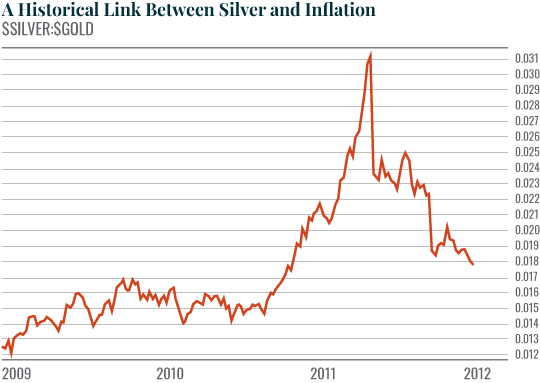 To hammer this point home: the ratio of silver to gold is great for determining when the financial system is beginning to anticipate higher rates of inflation. If the ratio begins to rise rapidly, you know inflation is on the way.

With that in mind, let’s take a look at what the ratio is doing today. 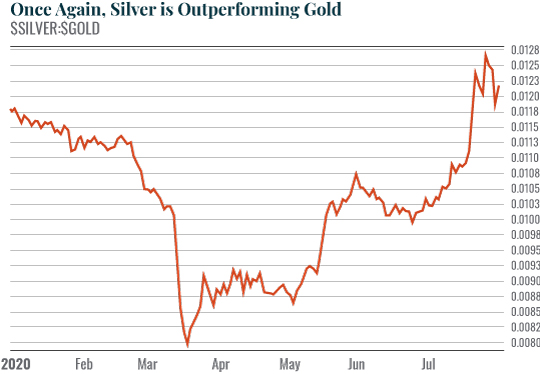 As you can see, silver began to dramatically outperform gold in late March – when the Fed first announced that it would be spending trillions of dollars to resolve the economic shutdown.

Put simply, silver’s outperformance of gold is telling us that the financial system is anticipating higher rates of inflation. With that in mind, let’s consider some price targets.

Silver recently broke above long-term resistance at $21 (lower red line below). After a move like this, I wouldn’t be surprised to see silver roll over to back-test this breakout.

However, after that, I would expect to see silver start another major leg higher, to eventually test $27 per ounce. 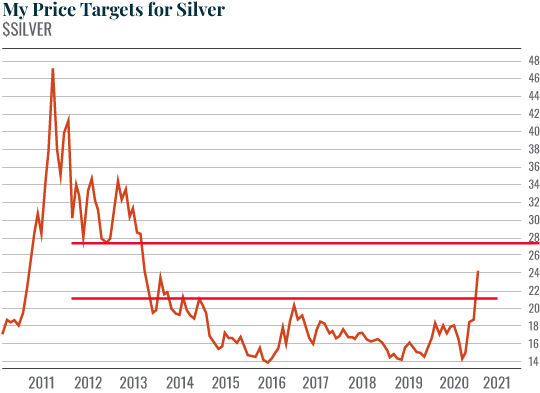 Given the fact that silver has been rising so rapidly, we might not even get a back-test! Regardless of whether the back-test comes or not… my near-term target for silver is $27 and change.