Well, they finally did it.

Having thrown over $6 trillion in newly printed money at the financial system, central banks managed to push the stock market to new all-time highs last week.

The S&P 500 broke above its all-time high of 3,393 briefly last week before closing the week down from this level. Emboldened by this, traders will try to push the market to new highs this week on a closing basis. 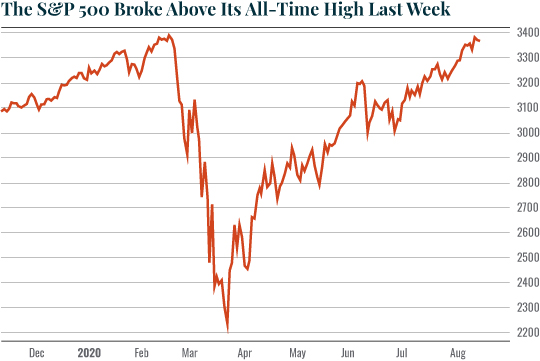 And why wouldn’t they? Central banks have spent over $6 trillion since the March lows. To put that into perspective, the last time central banks spent this much money, it took them FOUR YEARS (2008-2012). This time around, it took them just FIVE MONTHS (March-July 2020).

Put simply, central banks are “all in” on creating a massive bubble in the stock market.

And they will be using the FANG stocks to do this.

The fact is that since the market bottom, the FANG stocks have done almost all the heavy lifting, holding the rest of the market up for months.

Even with their recent correction, they’ve nearly DOUBLED the performance of the S&P 500 from the March lows. 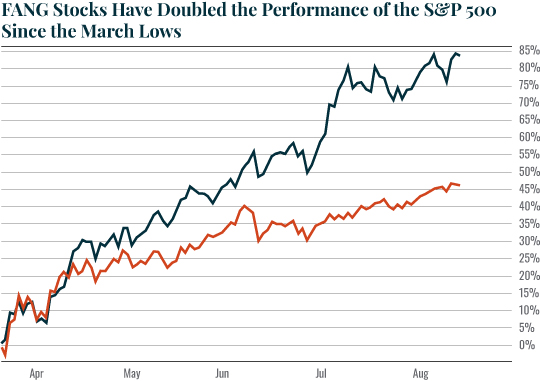 Put another way, time and again, no matter how overbought they became, the big FANG stocks continue to rally higher and higher, driven by “someone” who seemed hellbent on insuring the market didn’t collapse again.

Why were these companies outperforming/rallying so much?

Together, these companies account for nearly 20% of the market cap of the stock market. And if central banks can get them to rally, the rest of the market will follow.

Put another way, if you were going to rig the market, these are the companies you’d be buying.

We know Switzerland’s central bank, the Swiss National Bank, buys these companies. And I strongly suspect the Fed is doing it too via some backdoor method.

Regardless of who is doing the buying, “someone” is goosing the market using these companies. And it’s likely they’ll continue to do so no matter what.

As a result of this, getting ahead of what I believe are central bank actions is the #1 trading strategy going forward.

This is why we developed a proprietary options system that does precisely that.

I show you how it works in this short video.

Basically, all you have to do is place some simple trades to take advantage of “2-hour profit windows.”

We’ve made it easy.

As it could have a BIG impact on your finances… and each day that passes by you’re missing out.

Three months ago, I outlined three investment ideas to my readers. Here’s how they played out…

Reader Mailbag: My Take on Cryptocurrency

I’ve received a number of emails from you asking my thoughts on cryptocurrencies. Asked and answered…