The Fed announced nothing new yesterday. But that “nothing new” is still pretty extraordinary.

It’s truly extraordinary that these kinds of policies are being normalized. There was a time, when interest rates being held at zero for years on end was considered lunacy. It is now the Fed’s “go-to” rate policy for any crisis.

A mere 13 years ago, large-scale QE programs were extremely unusual. Obviously, we are well past that point. However, what is striking is the fact that we are at a point at which the Fed is normalizing the use of increasingly larger QE programs.

The Fed is now stating it will run a QE program that is 50% larger than this ($120 billion) for THREE years. And this is considered not only acceptable but is actually expected!

Big picture, yesterday’s FOMC announcement confirmed that the Fed is back in “bubble mode” as it was from 2008 until 2014. We can expect interest rates to remain at zero for four years and QE of $1+ trillion per year.

Recently, I’ve become perplexed by the large gap between what the Fed claims it will do and what it is actually doing. Publicly the Fed claims it is currently engaged in a $125 billion per month QE program, and yet its balance sheet is DOWN since June. 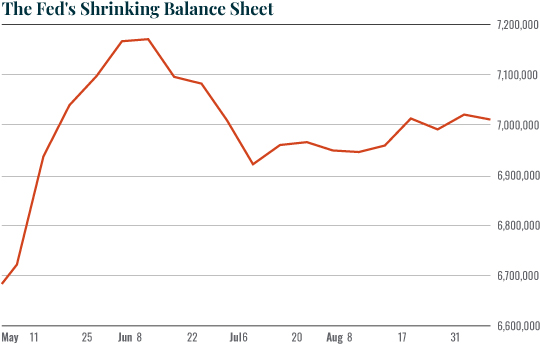 Some of this decline is due to the Fed shrinking its currency swap holdings (a means through which the Fed exchanges dollars with international banks as a means of providing liquidity during crises).

However, the fact remains that the Fed’s QE program is not adding up.

The Fed is supposed to be running a $40 billion per month QE program for Mortgage Backed Securities… but its holdings for these assets have only increased $16 billion in the last five weeks and have actually DECREASED over the last eight weeks.

Another example of the Fed’s bizarre behavior concerns its Main Street lending program. The Fed is supposed to lend out $600 billion directly into small businesses / Main Street in an effort to spur the economy.

Since the inception of this facility two months ago, the Fed has only loaned out $1.2 billion, or a measly 0.2%.

What is going on here? The Fed is clearly saying one thing and doing something else. Is there a mutiny at the Fed in which it is intentionally failing to perform the programs it claimed it would in order to hold back the recovery and hurt President Trump’s chances of re-election?

Trump’s Master Plan to Take Over the Fed

Buckle up. Because on Sunday of this week, the President revealed his Master Plan for the Fed via one of his proxies...